Gun received and all seems really good. Many thanks for the excellent work on a first class target rifle that I had been told to scrap, as it was effectively beyond repair Chris - Carlisle (Original Model 75)

Hi Kev, Sorry I haven’t had chance to contact you before now. Just a quick thank you for the work you completed on the rifle. It looks great and dad was chuffed to bits with it.
Gaz RM Plymouth - (BSA Meteor Mk 1 - Complete Renovation see gallery)

Hi Kev, just got my gun back and thank you for it it's great. Andy, Ipswich - (Falcon)

Thanks for servicing my Daystate LR90. I've just had it out on the range and it put five shots through the same hole. Bloody Marvellous. Joe, Doncaster - (Daystate LR90)

Kev, I am well pleased with the rifle. I purchased a new cover for it and gave it to my grandson. He was over the moon with it. It puts a pellet right through a can and out the other side. Not bad for an old gun! Had I known about your company I would have sent the gun to you first rather than attempt to do it myself. Keep on doing what you are doing! Roy, Pontypool - (BSA Meteor Mk 2 - Complete Rebuild - see the rebuild)

Thanks for the work on my FAS AP604. Despite it now being well over 20 years old, your recent service has brought it back to life. It is now far more powerful and as accurate as it was when new in 1989. It also looks great after the general clean-up and polishing of the internals. Can't wait to get back on the range with it. Again, thanks for the work. I'll be recommending your services to others. Best Regards Stuart, Hull - (FAS AP604)

Kev, Many thanks for the work. I am pleased with the servicing and the polishing. The EV looks great! John, Northants - (Air Arms EV2 - see gallery)

Thanks for helping me out with a couple of free seals for my gun. I couldn't get them anywhere. You guys are great. Jack, Doncaster

Thanks for sorting out the Gamo for me. As a result of your perseverance, the original dealer is sending out a replacement under warranty. Great service, I have already given your number to a friend.John, Cudworth 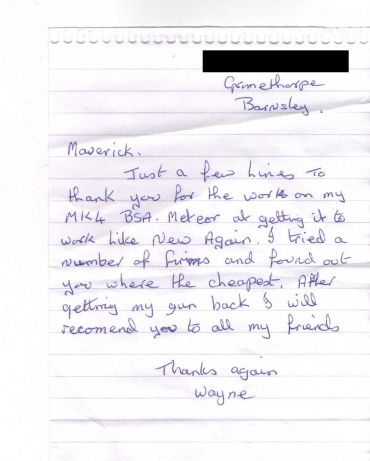 The work you did on the Goldstar is absolutely great and its performing really well, you even sorted the magazine for me-that was a real bonus! Its working better than new, it was always prone to jamming! When my main guns need attention I will be sending them straight up to you guys, I'll have absolutely no hesitation in highly recommending you to others, great work, cheers kev, all the best, Lyn, Pembrokeshire - May 2015

Can you say thanks to the engineer who worked on my air rifle. I have just got back from the rifle club after shooting my gun. It now cocks smoothly and with less effort than ever before and I have owned it from brand new. Thanks for the fantastic work. Nigel, Cleveland - June 2015

The gun arrived OK and works great, thanks for your efforts Rob, Beds - August 2015

The results were very impressive, the accuracy greatly improving, I was putting pellet on pellet time after time, putting 40 shots through it before I noticed the slightest of drops. Amazing..!! It has given me the confidence in the old girl again, this was my first rifle and is my favourite, being nearly 20 years old now. The rifle cocks and loads the magazine much smoother, and the trigger is lovely, with just the right amount of resistance on it. Whatever you did on the service and tune, it has definitely worked. (Falcon FN19) John, Kent - September 2015

Got my scopes mounted and a few shots put through the HW77. Fantastic job guys super smooth and so much quieter, very impressed. You took the time to explain the condition of the rifle before the work and also explained what had been done. What can I say, great service great job. Thanks Guys. Tim, Rotherham - September 2015

I appreciate all the effort you have put in.The rifle is working great. Thanks - Norman, Edinburgh - July 2015